In 2017 we moved on from Eveleigh due to changes in and around the site and the tenure arrangements. We’re setting ourselves up in the Illawarra and enjoying some great tenure with fantastic supporters like Bluescope and UGL. Down in Port Kembla in particular, we have made the most of the COVID downtime.

Our Port Kembla team have been busy repainting the train from one end to the other. Huge thanks to our friends at Dulux for the kind supply of Gloss Enamel oil based paints. Worth doing, worth Dulux! 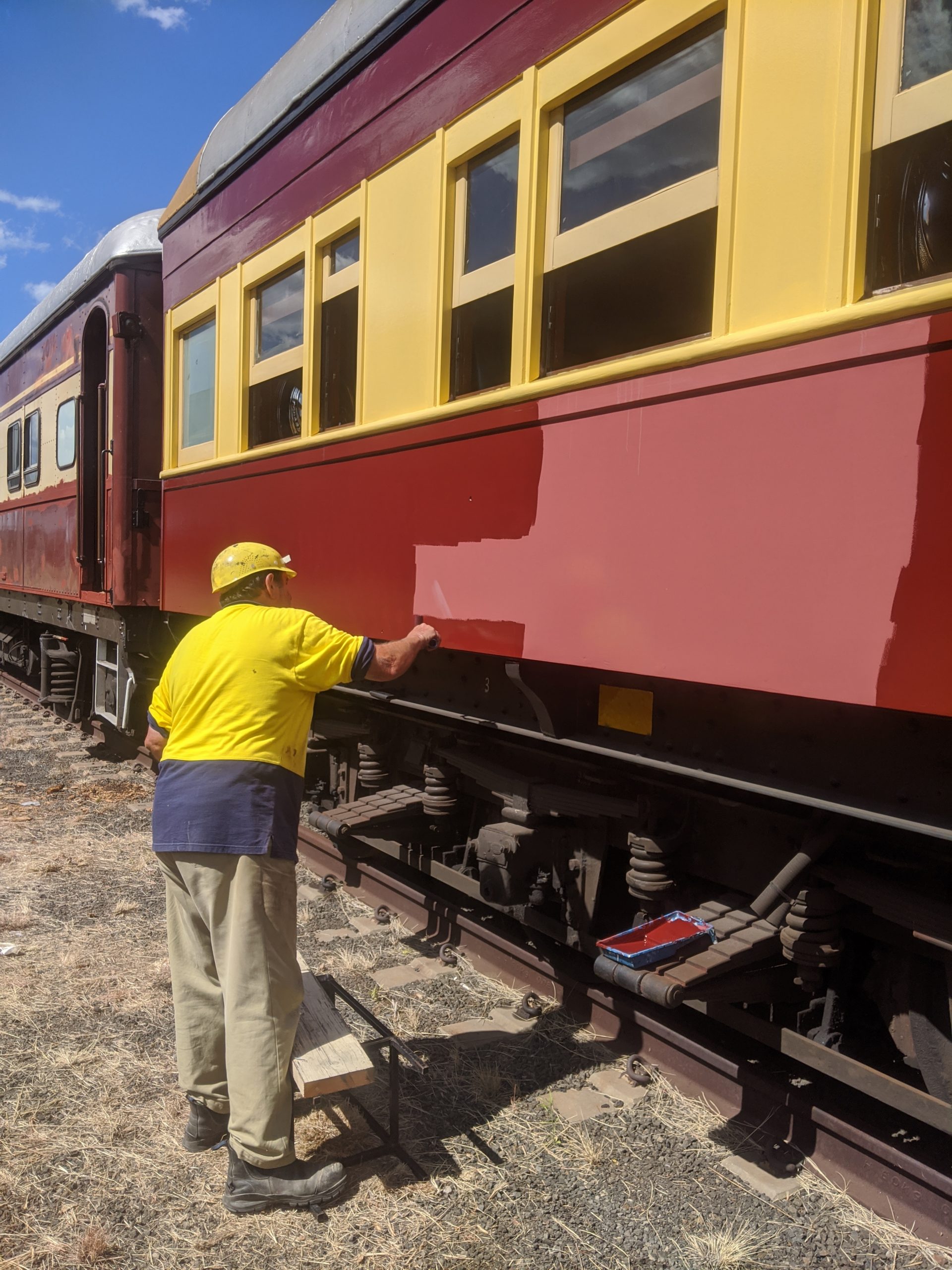 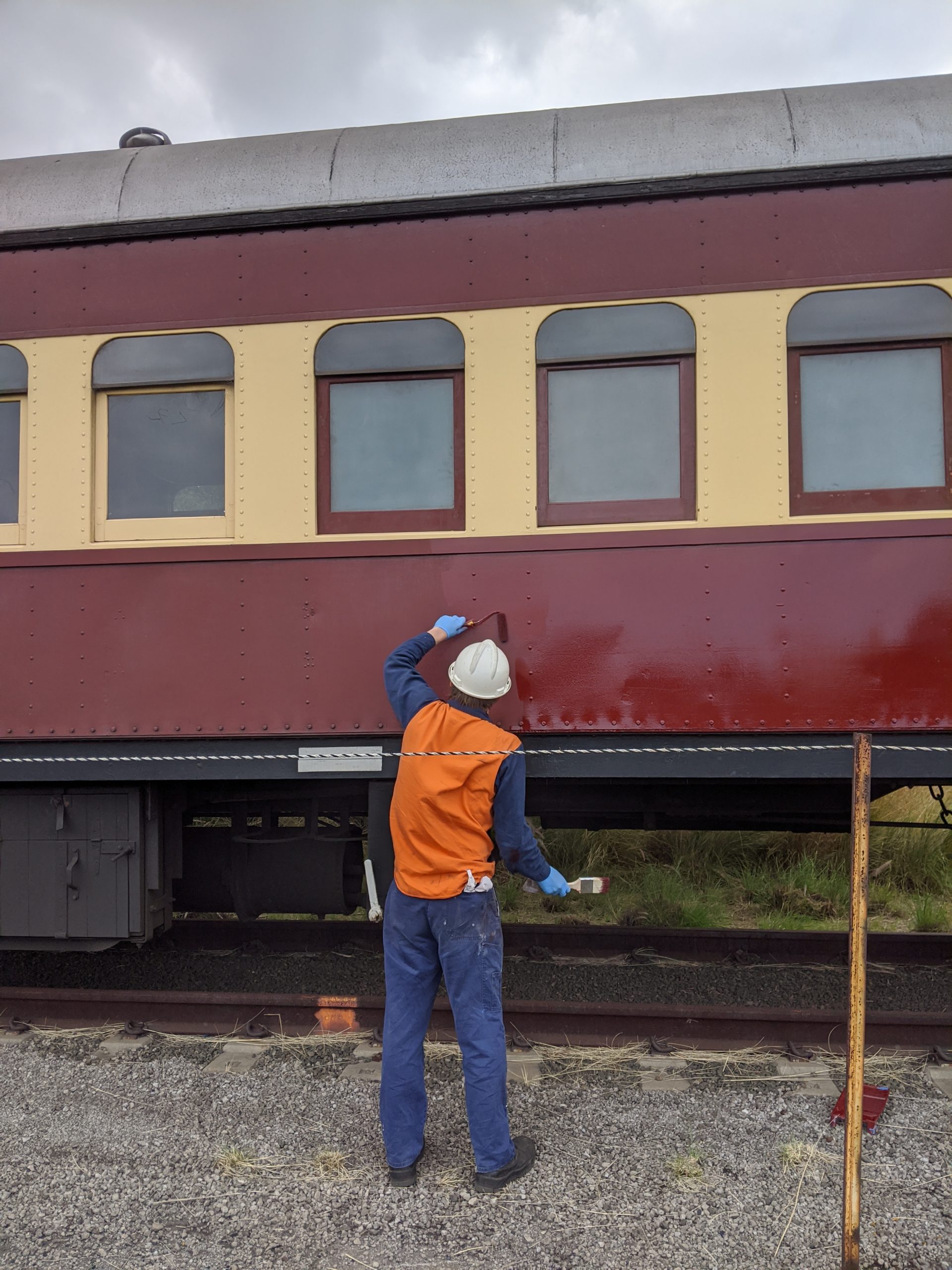 Its more than just prettying them up – a good paint system protects the steelwork and the carriage structure. Fresh paint does look good too though! To save the cutting in, we just slip the fittings off and put them back on at the end: 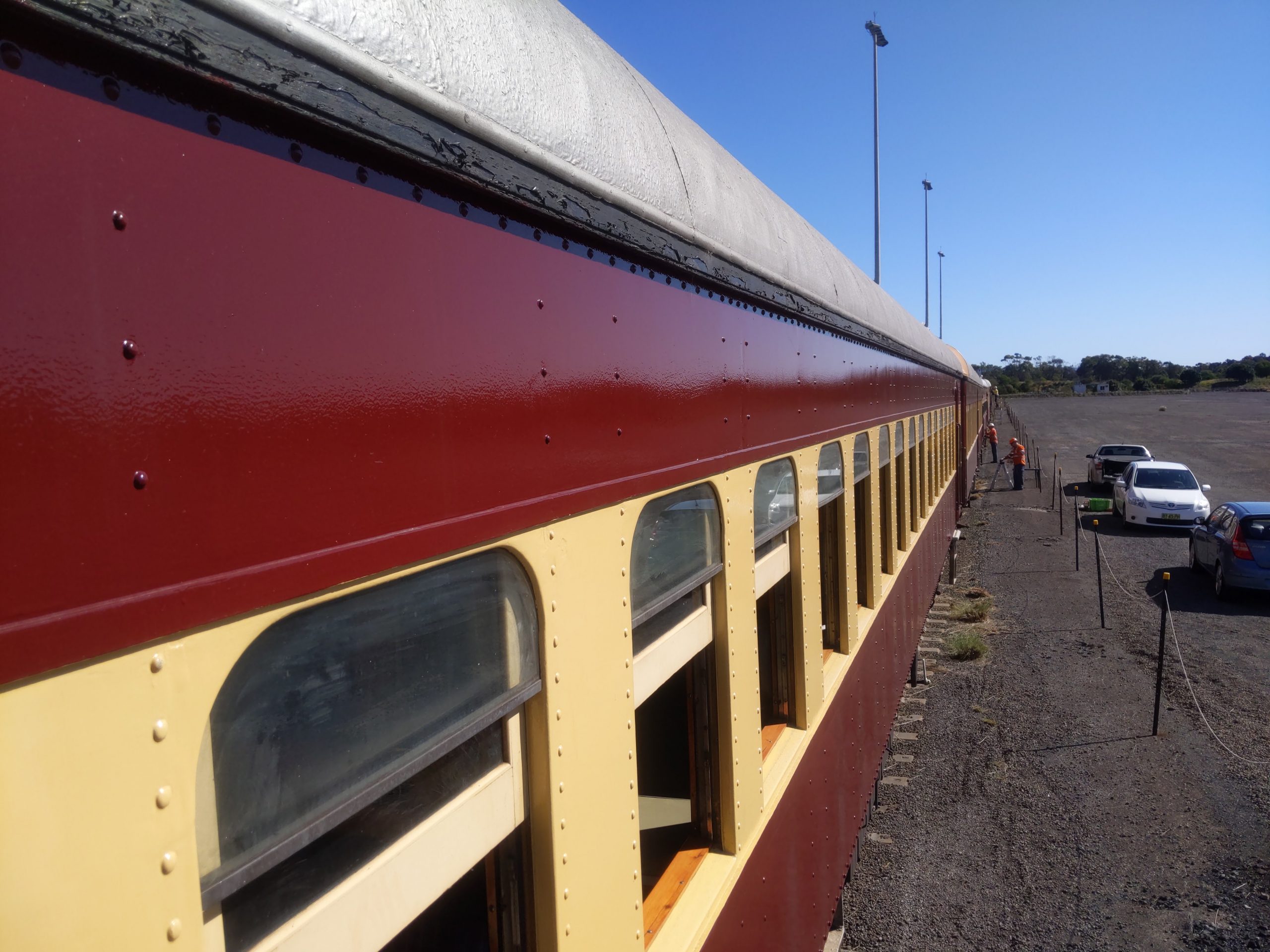 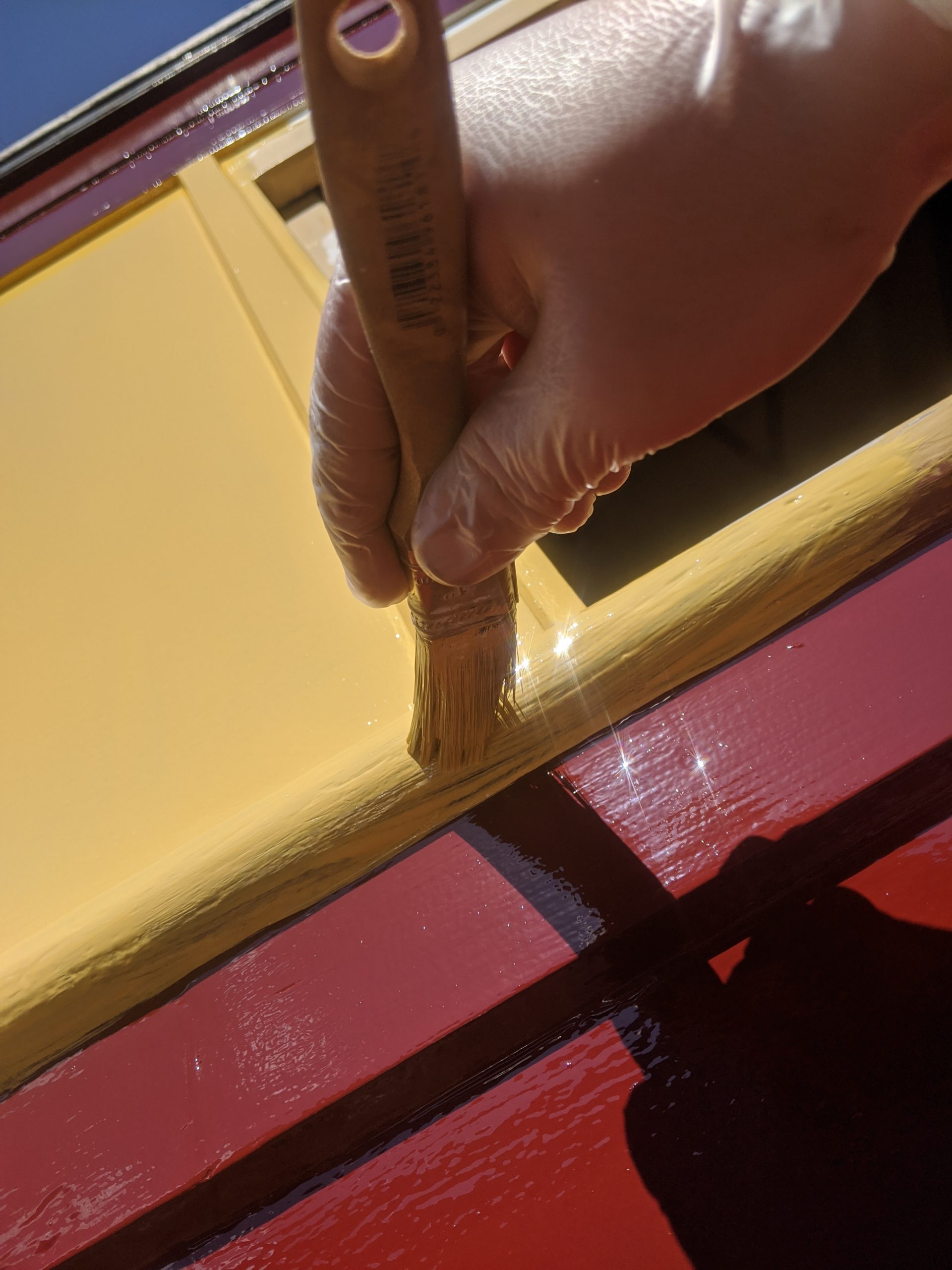 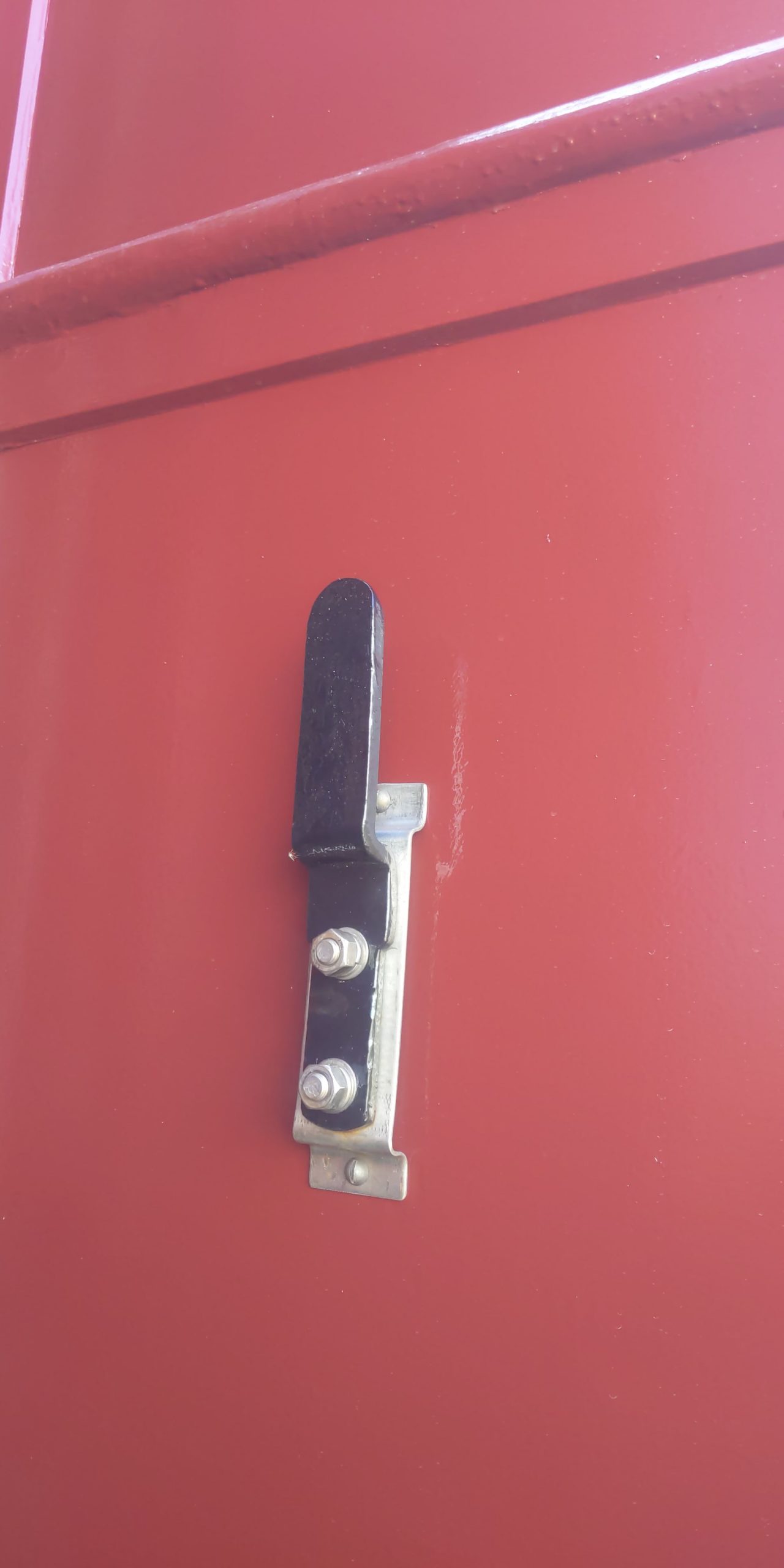 After several months painting the running set, it’s a reminder the CPJ lounge car needs some love later on – watch this space! 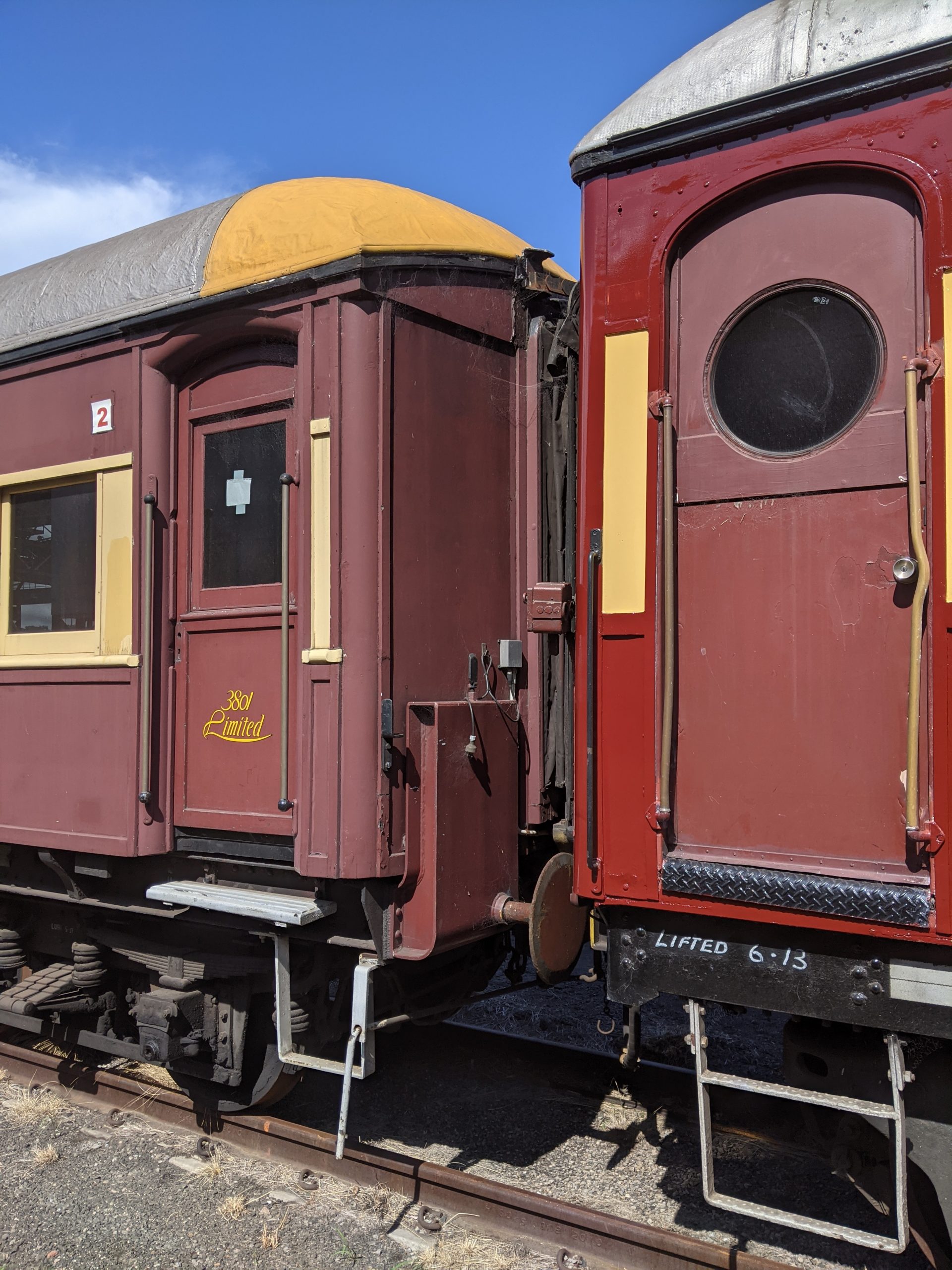 We didn’t stop at the bodywork though – the frames were next, and the steps came off for stripping. We went with gloss black, and high vis yellow non-slip treads: 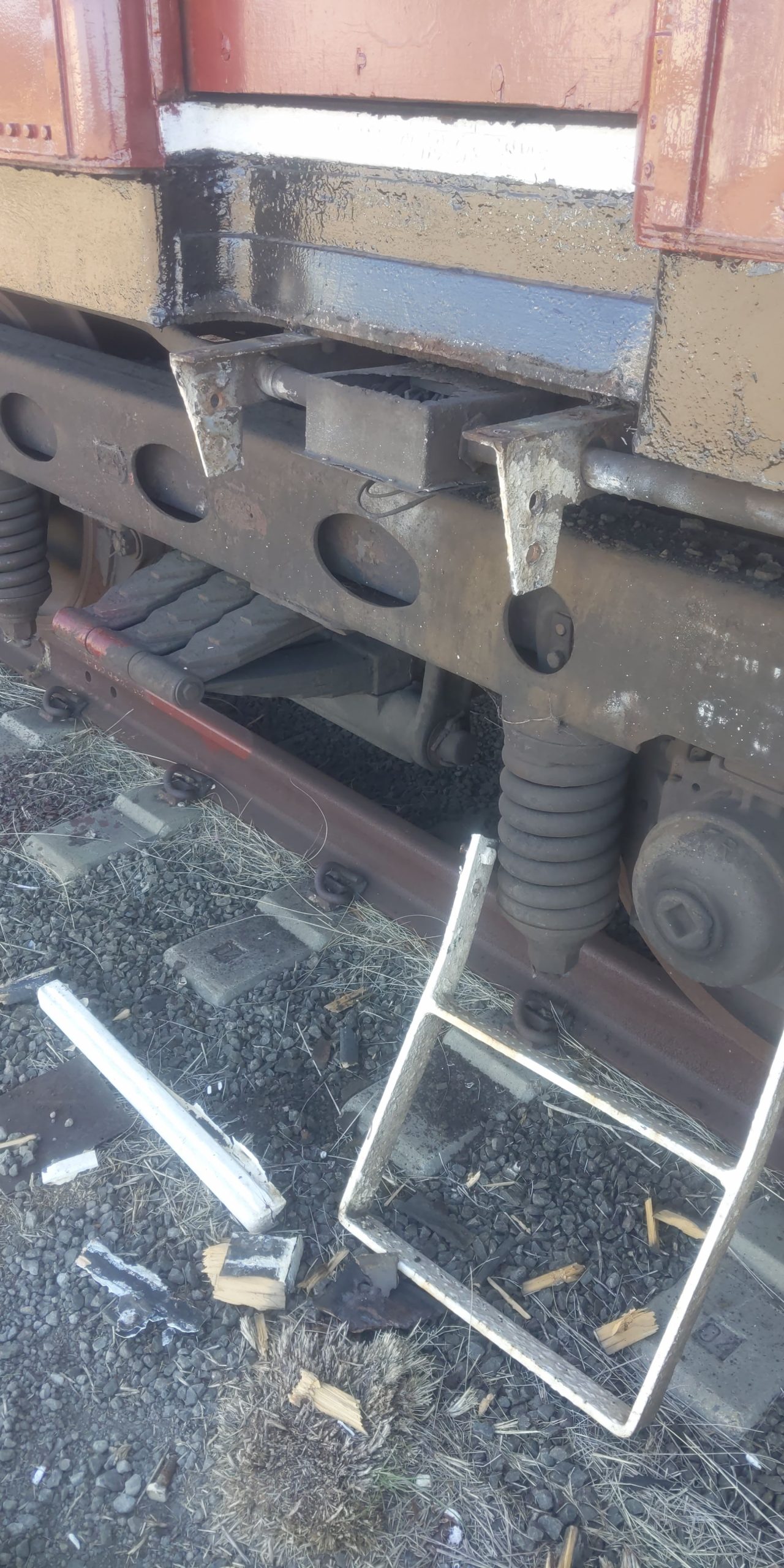 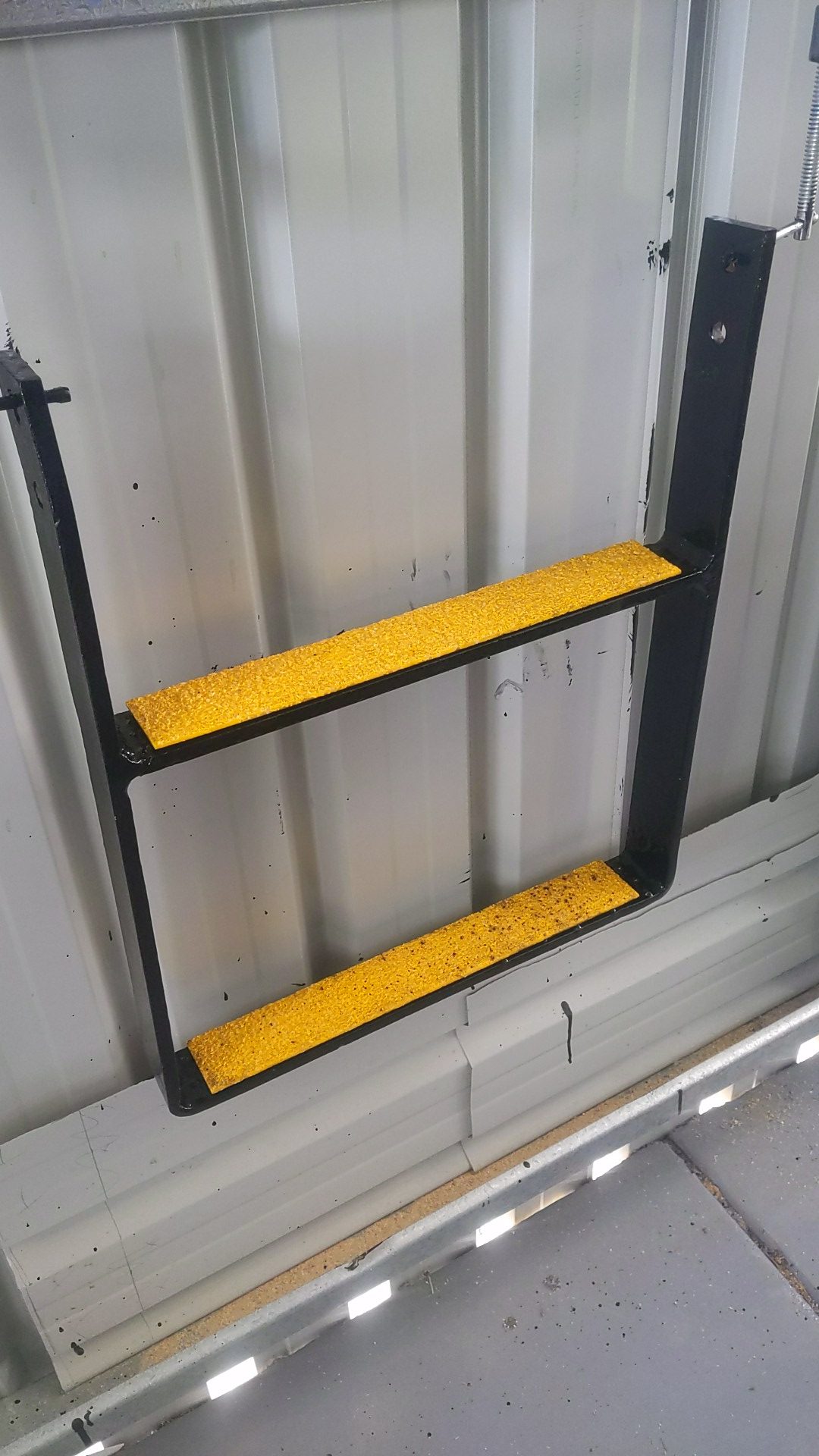 The slack adjuster bracket didn’t go without its share – gloss white was used to highlight the position of the slack adjuster at a glance, to help our maintenance team doing pre-trip inspections. Gloss black frames and fresh gloss white lettering look the goods, now the bogies stand out though! 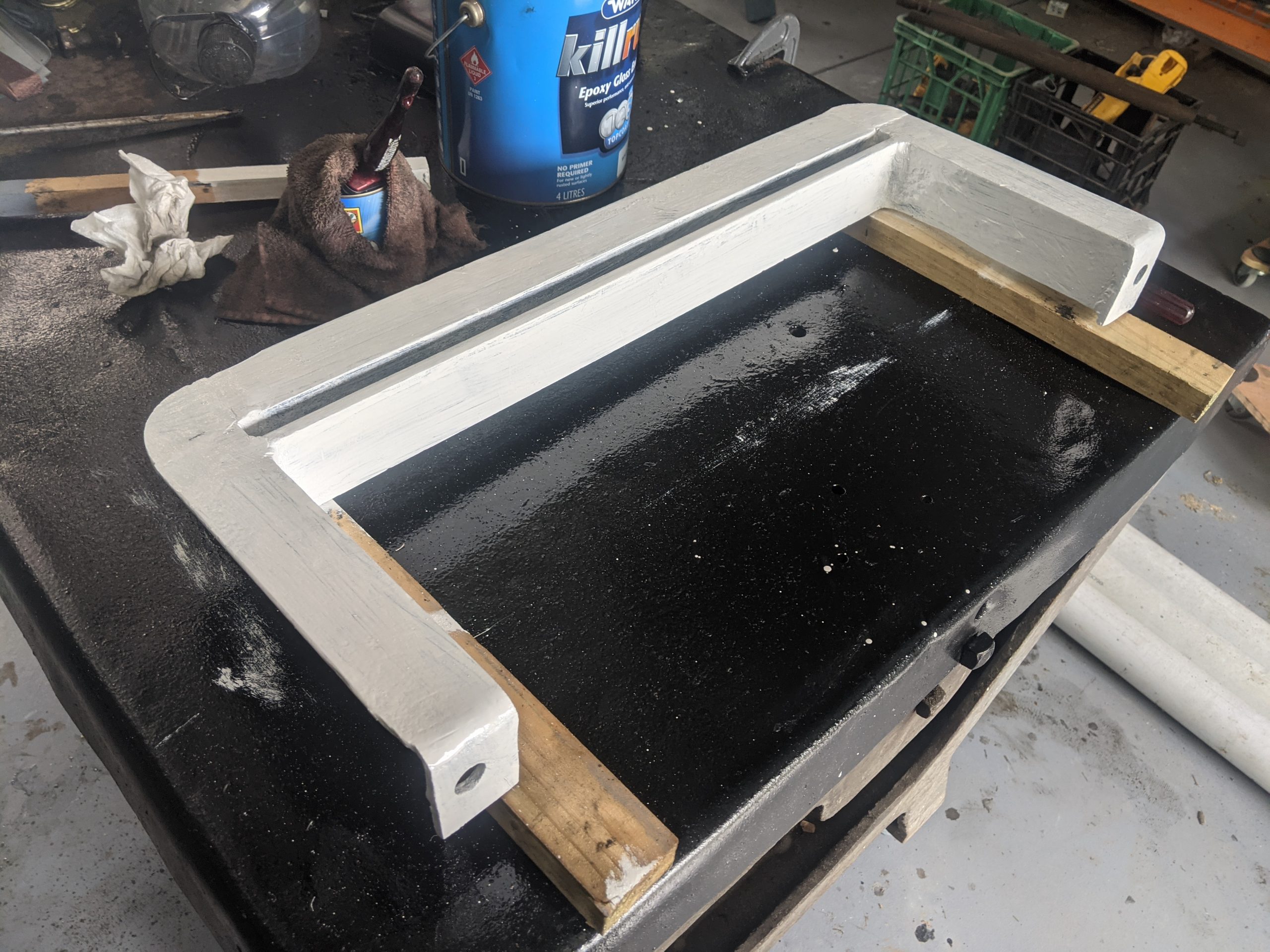 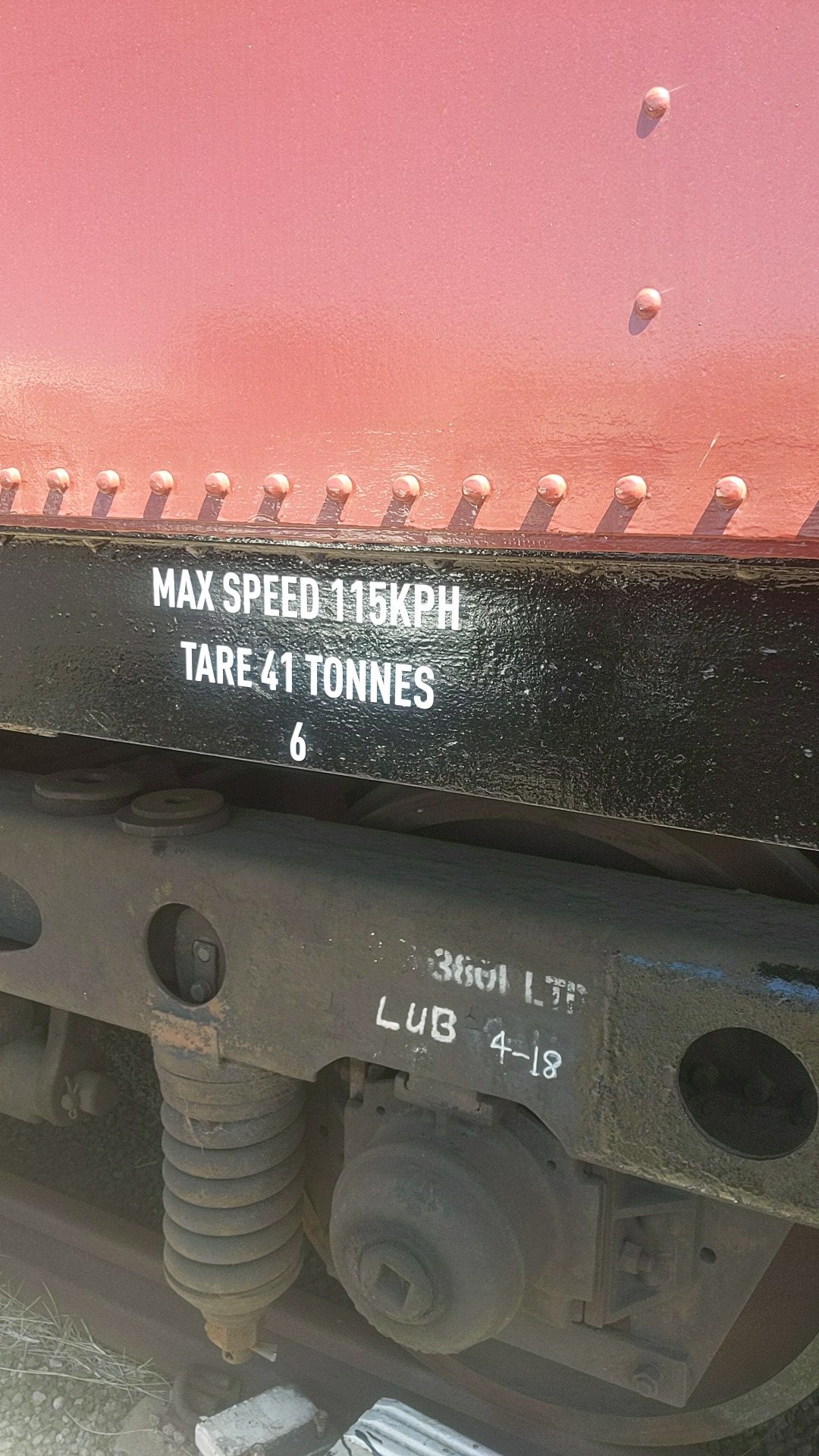 We didn’t stop at the frame either – we pressure cleaned, primed and glossed the under floor of the carriages to protect the steel work: 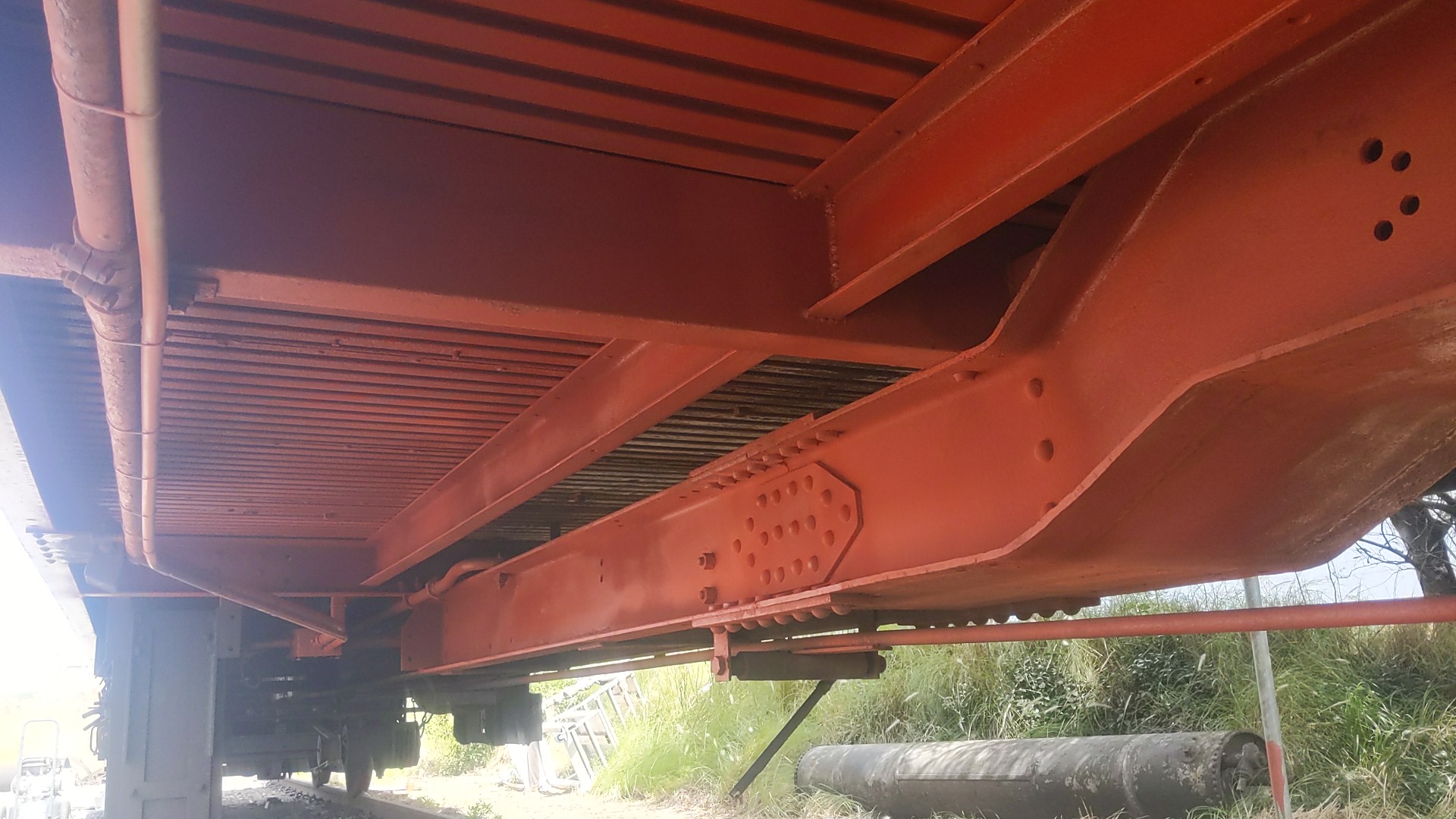 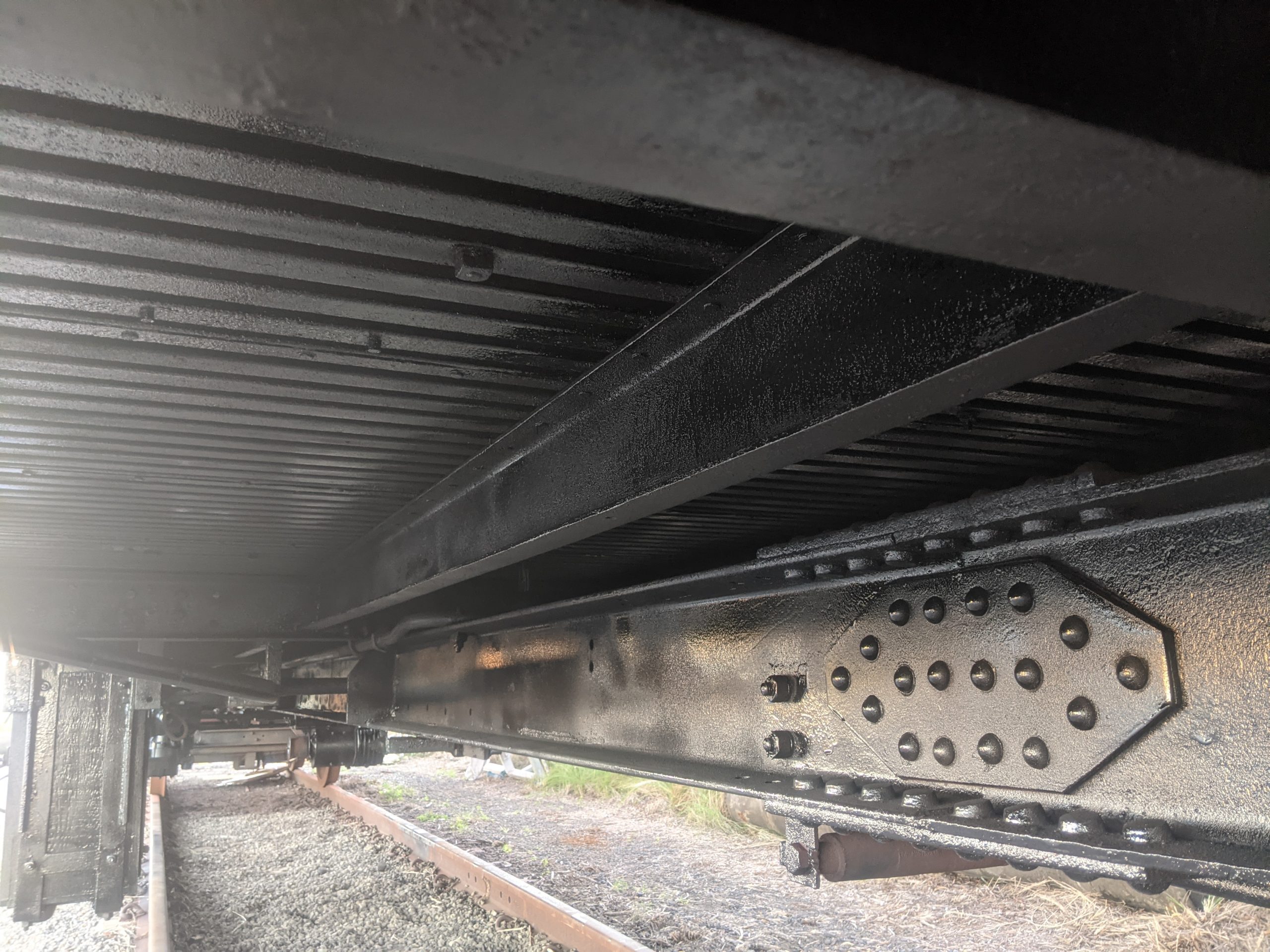 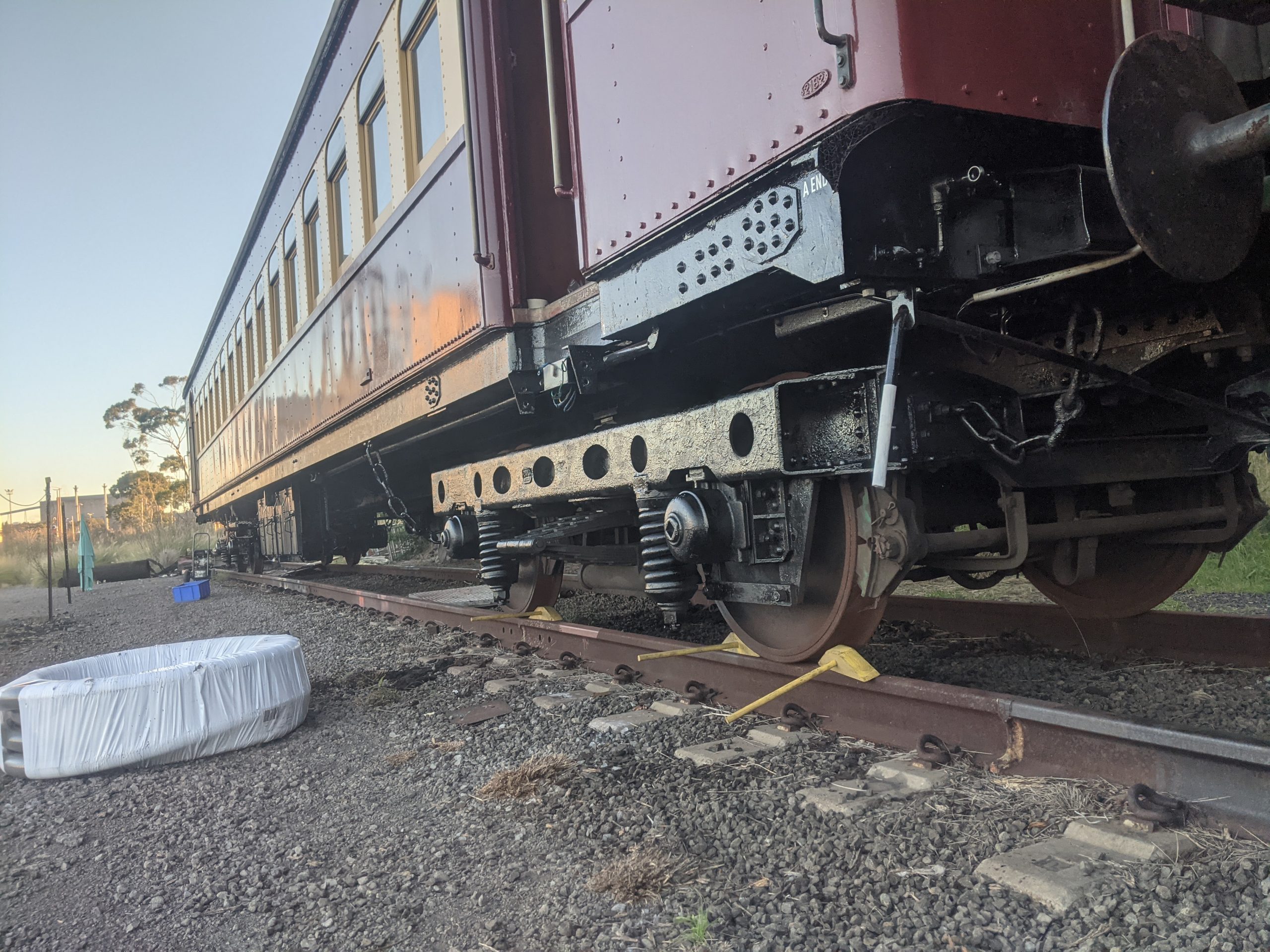 But we didn’t stop there, all the battery boxes on the carriages received freshly rebuilt battery boxes. These were full strip downs, back to the basic metal components and fresh structural ply: 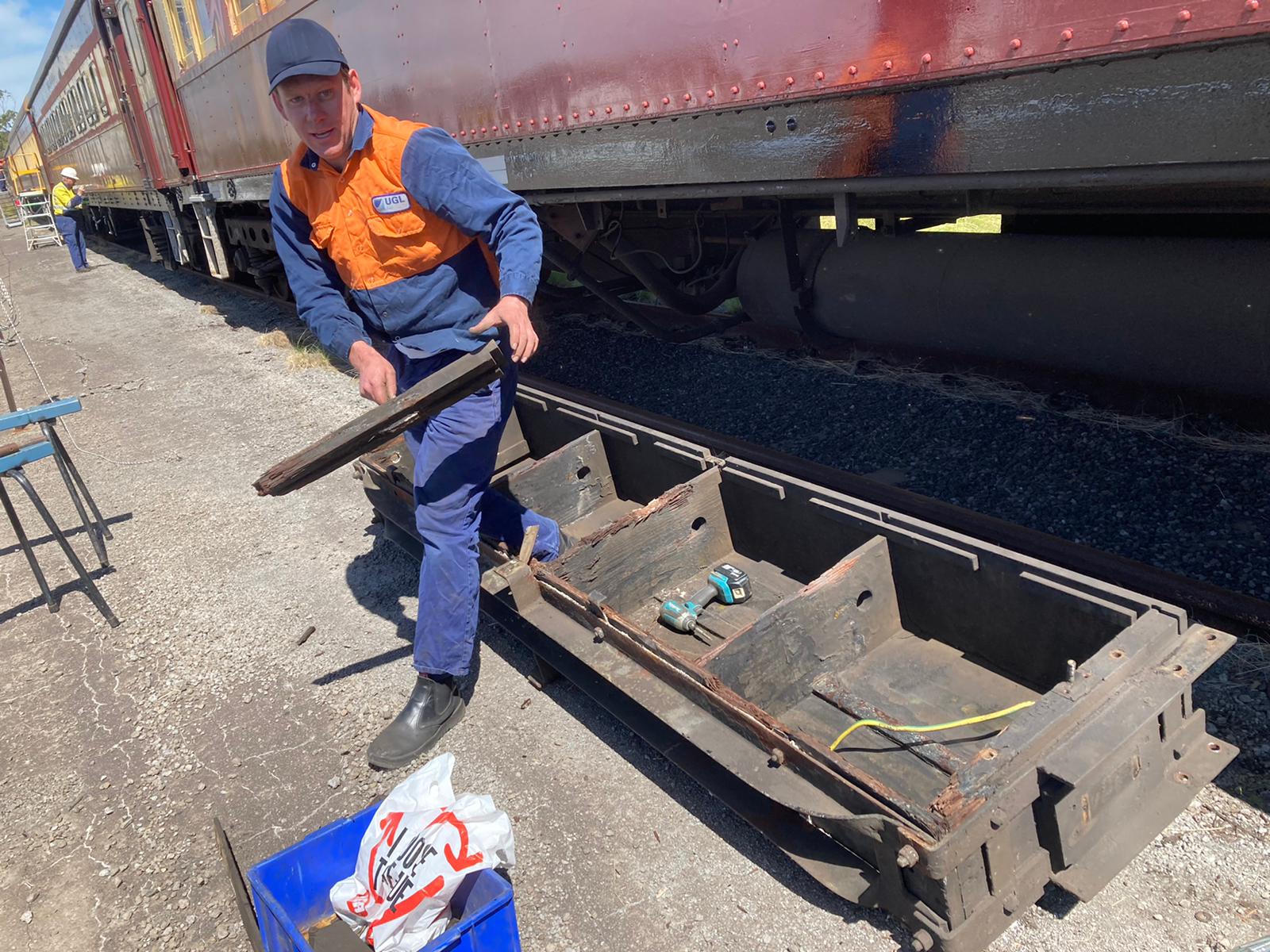 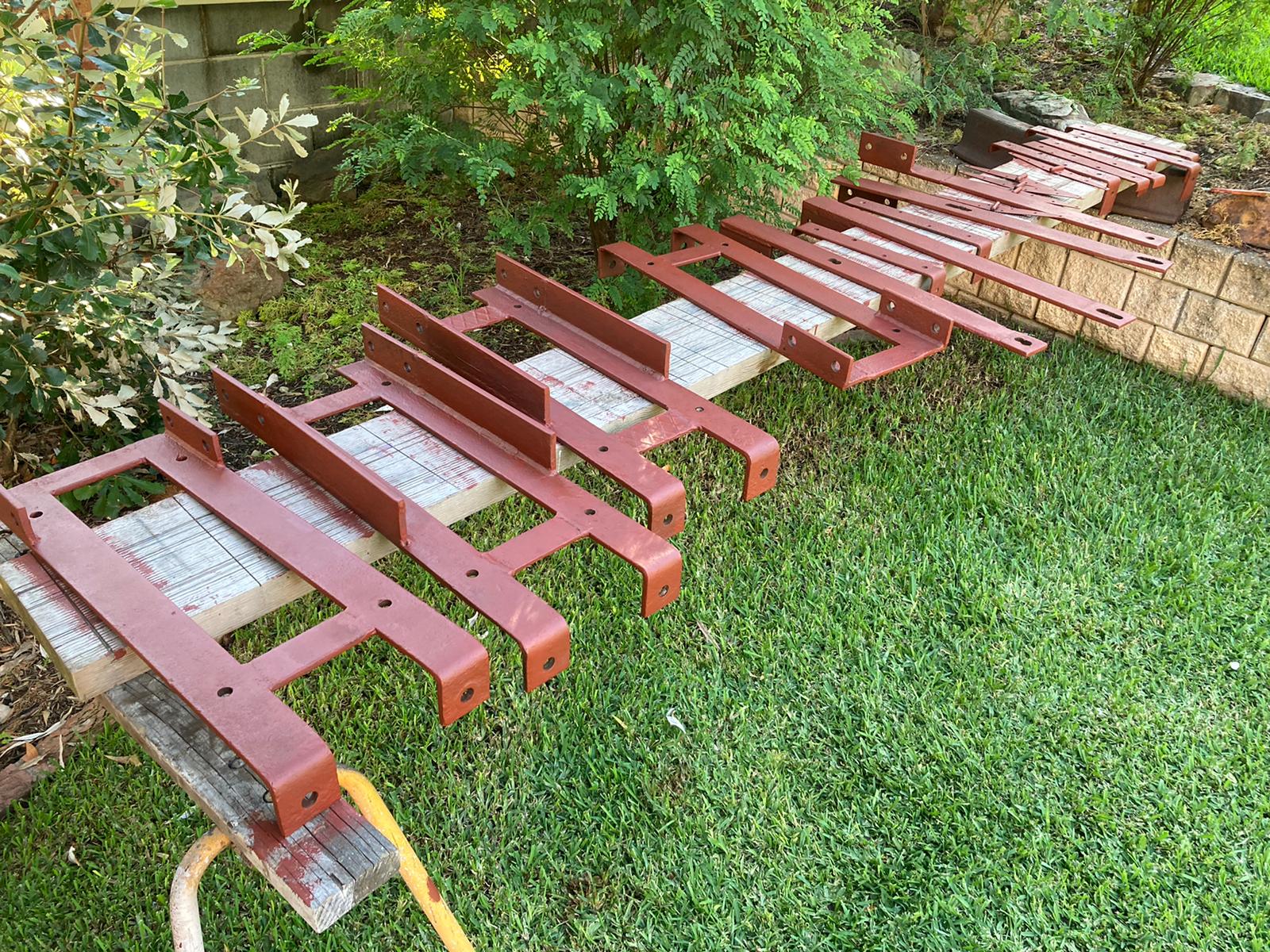 Working from home is nothing new to us! 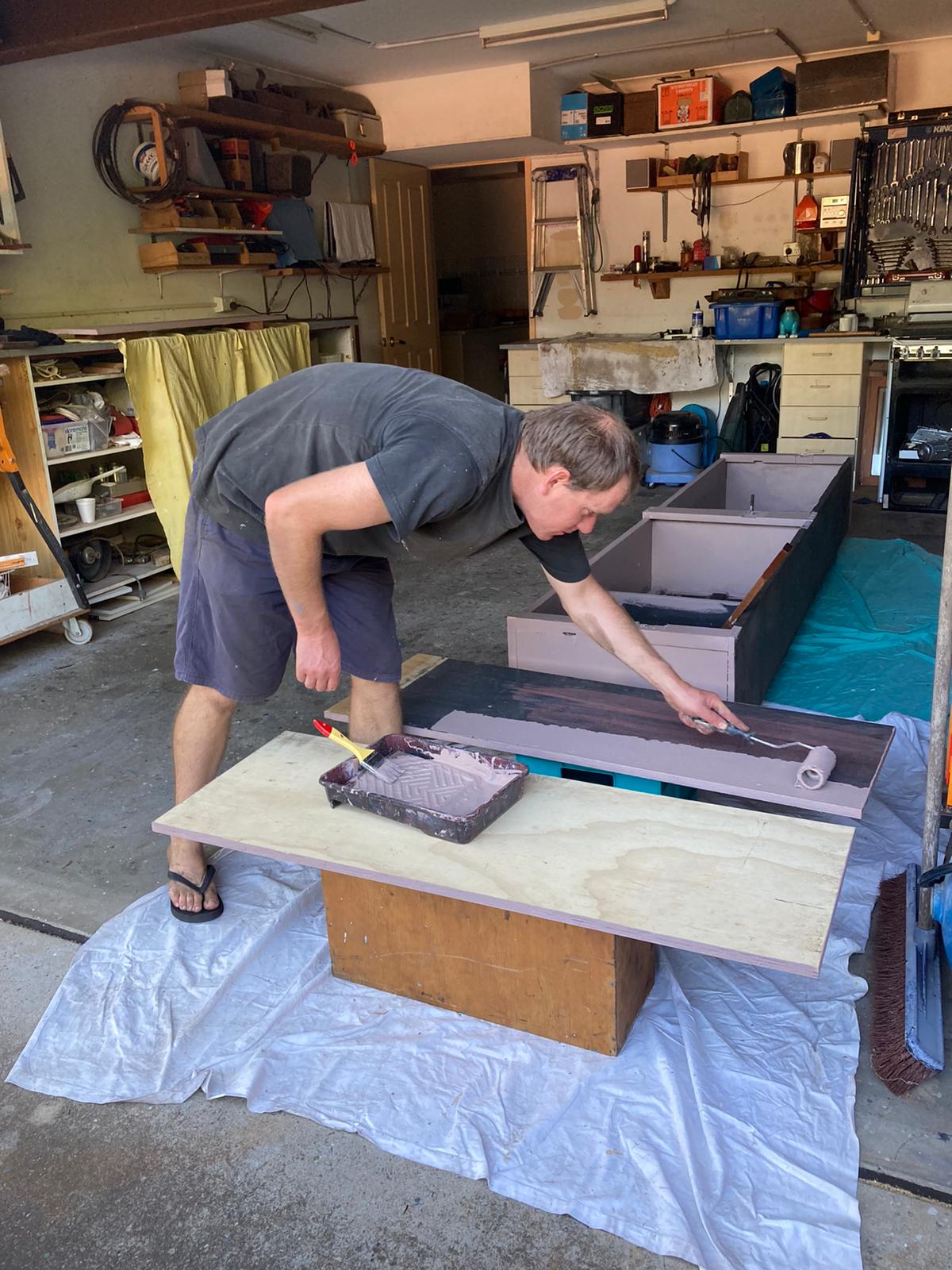 Brett and Chris reckoned the easiest cars to re-fit battery boxes by far were the 12 wheelers with their 4 truss rods: 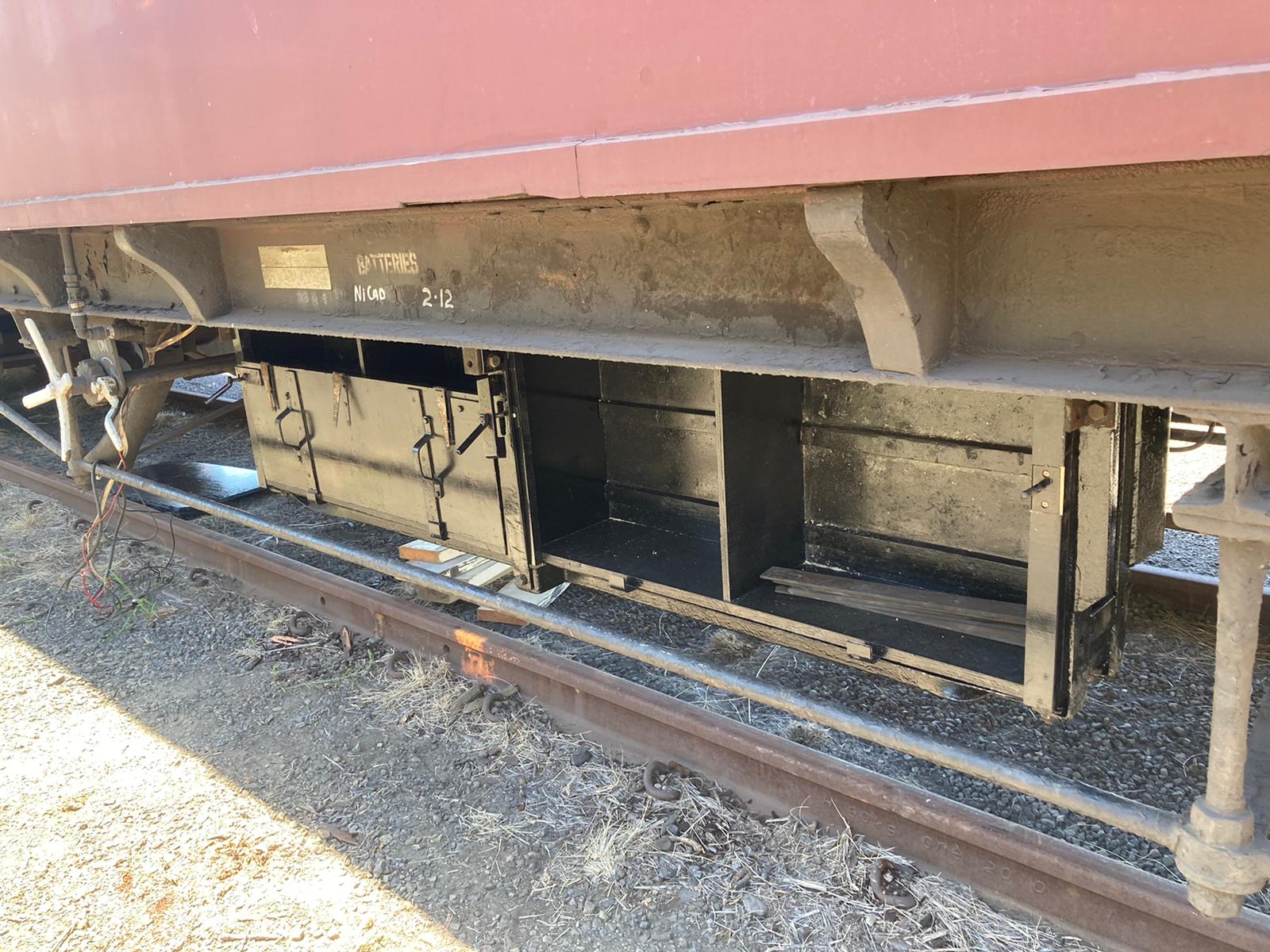 But we didn’t stop there either! The SFN received a plumbing upgrade, from the old rusty steel water pipes to fresh modern poly pipes. We also moved away from the troublesome air operated water service units, upgrading to an electric water pump – we’ll work through upgrading the other cars too as time permits. Also installed were some new stop cocks that help us isolate the toilets, something we could have done with in the past! Thanks to our friends at Rob Lemme plumbing for provision of their excellent plumbing services. 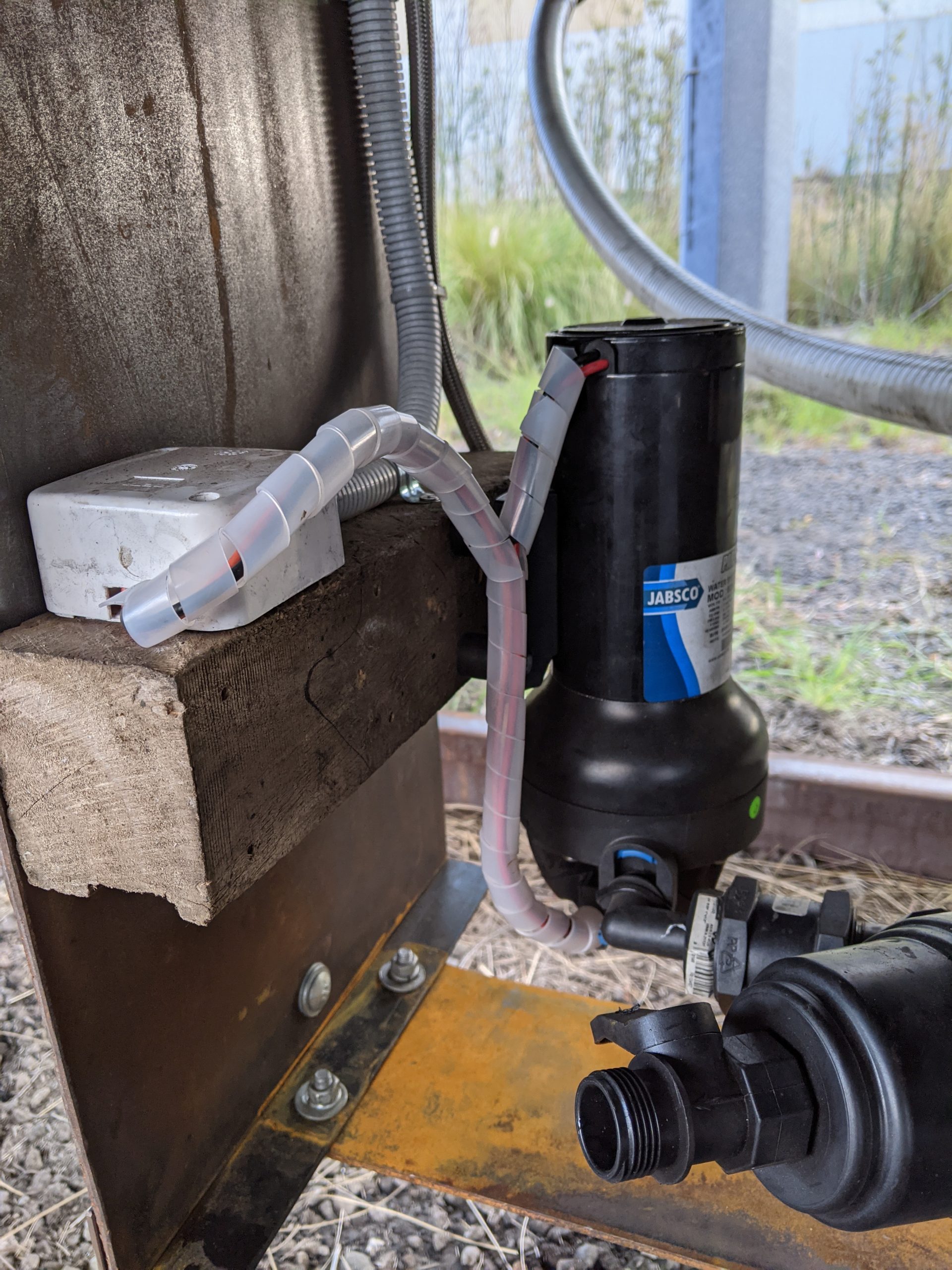 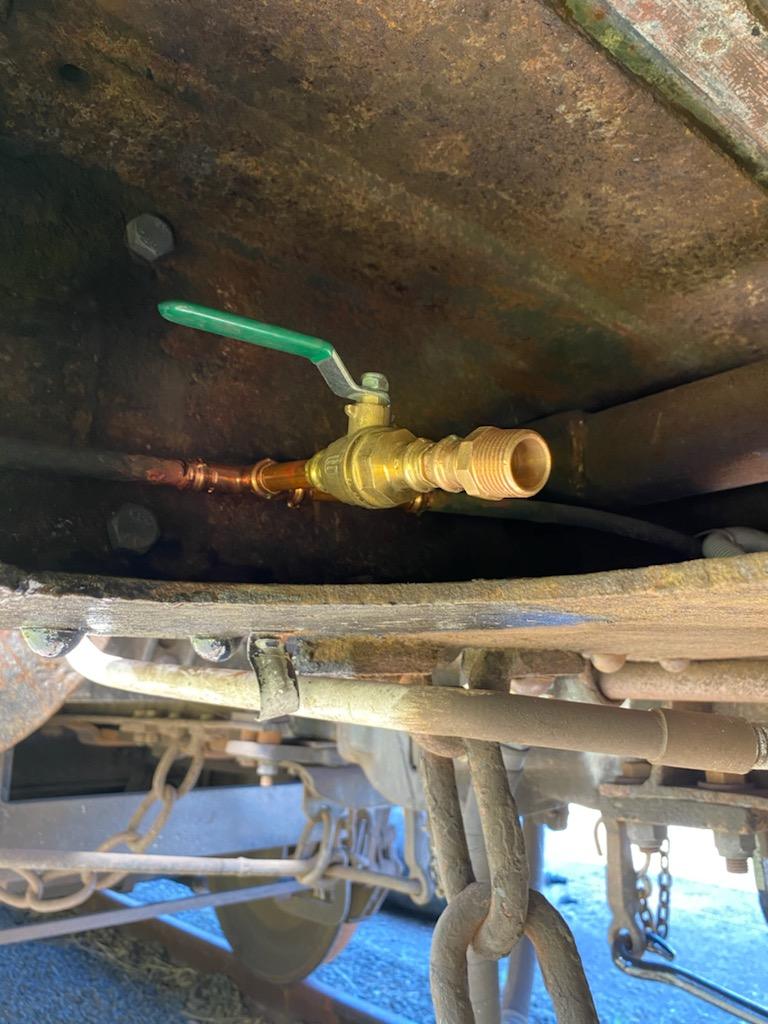 Inside the cars, Chris made up some new in house quick release fasteners for the emergency steps: 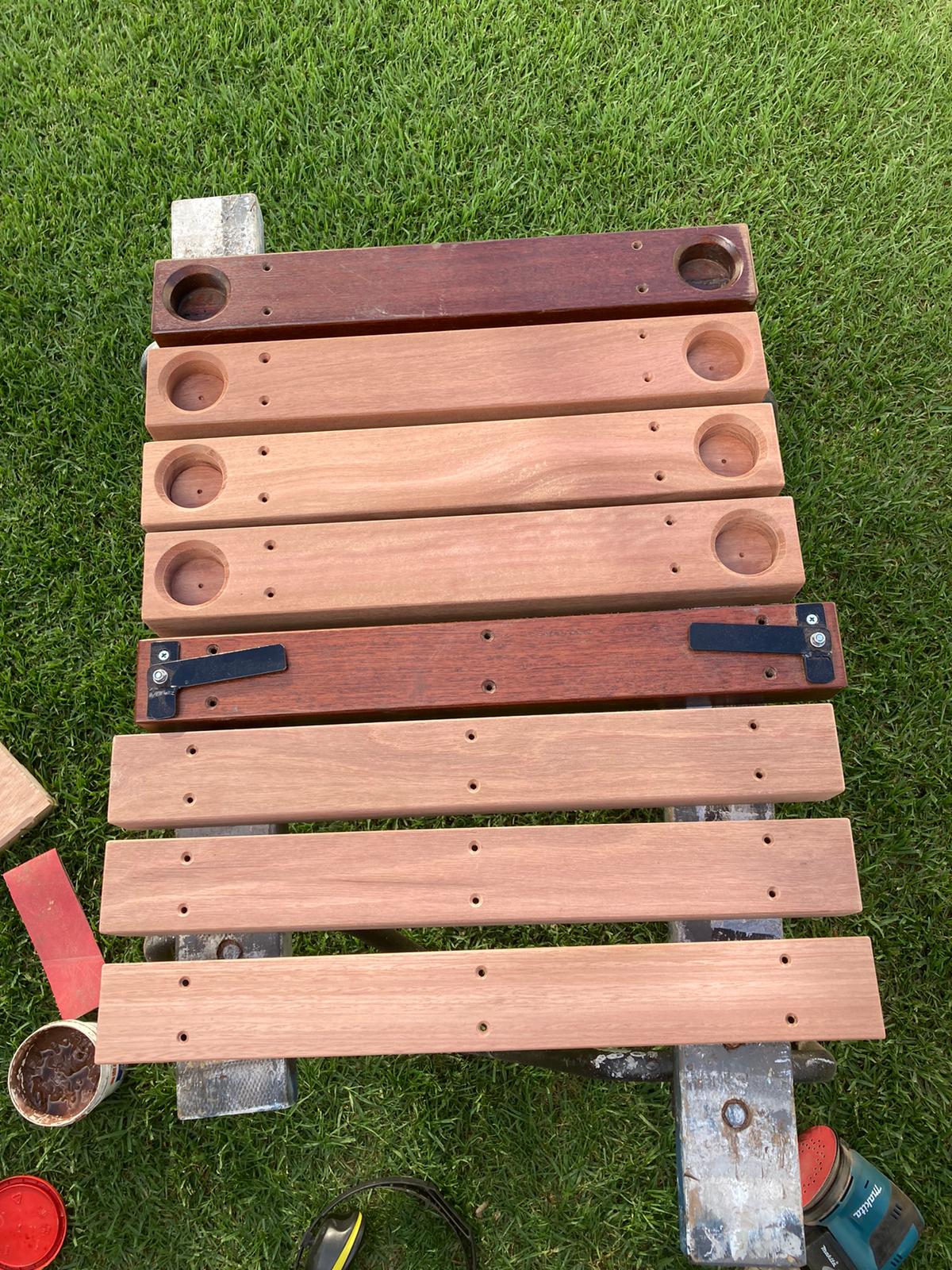 Life after Eveleigh isn’t all bad – life’s what you make it, and our hunger to keep our heritage trains running helps to promote regional tourism and linking the city with the regions! Stay tuned for more maintenance updates with the new ECHR Projects blog – until next time!

East Coast Heritage Rail is proud to announce the purchase of former Victorian Railways third series X class locomotive X54. We plan to return X54 to operational condition, which will allow us to expand our tour offerings.

X54 was built by Clyde Engineering at their Rosewater plant in Adelaide, and entered service with the Victorian Railways in June 1976. Working on both broad gauge and standard gauge, the X class could be found all over the Victorian Railways system, working both freight and passenger trains. Members of the class on broad gauge could often be found on the Melbourne to Adelaide corridor, working both The Overland passenger train or the ‘Jet’ express goods services between the two cities.

The third series X class were the first Victorian locos to venture into NSW under the ‘through working’ arrangement, and in the early 1980’s could often be seen on interstate express passenger trains such as the Southern Aurora, Spirit of Progress and Intercapital Daylight between Sydney and Melbourne.

When the Victorian Railways restructured in 1983, ownership of the X class passed to V/Line. All remained in Government ownership until 1999 when V/Line Freight was privatised and sold to Freight Victoria, later becoming Freight Australia as their operations expanded in 2000. In 2004 Freight Australia was purchased by Pacific National. As a condition of this sale, X54 was one of two X class locomotives that were gifted to the then newly established Queensland Rail National, to help with their start-up of interstate standard gauge operations. It remained in service with QR National (becoming Aurizon in 2012) up until Aurizon ceased operating intermodal freight in December 2017. It saw use for a brief period in 2018 to support Aurizon’s Hunter Valley coal and grain operations, however it was placed into storage in late 2018 and has not been used since.

We look forward to reactivating X54 and bringing it to you on our future tours – watch this space!